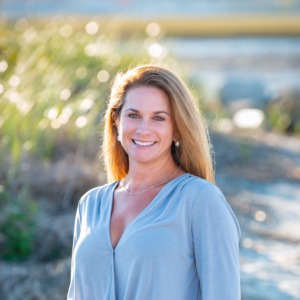 Carrie started her career in Real Estate 2006 with Keller Williams. In October 2011, she was their Top Producer! Carrie teamed up with Amy and joining The Maine Real Estate Network in January 2012, she has been continuing that trend. The Scoville Foley Team has been in the Top Ten producing agents at TMREN every quarter. Considering there are over 400 agents, that's pretty impressive!

Carrie is a highly motivated go-getter and straight shooter that consistently earns the trust and satisfaction of her clients. She is not afraid to do what it takes to achieve the deals that her clients want and that are in their best interests.

Carrie has lived in Scarborough with her husband and two children since 2001. She enjoys running and staying active with her family. Carrie knew from a young age that Maine was where she wanted to start and raise her family—after years of summering in Ocean Park, Carrie and her husband decided to build their Maine home! Carrie is the youngest of seven children, three of which actively practice real estate today. Her Dad was in sales all his life, so I guess you could say it was innate!

The Scoville-Foley team did exactly what we expected and hoped for with the sale of our multi unit. In this hot market, they knew what price to list at, what was important to have a good open house, and how to time the coming soon and listing advertisements. They were very respectful of our tenants and professional in their business. The goal was to get many people interested in the property and to show up to the open house and they exceeded our expectations. I will use and recommend them again.
Kevin, Saco, left feedback 7 months ago
Thank you Amy for helping us close this deal. You stayed strong when we needed it and felt like hope was lost. You were our rock start to finish! We have had nothing but good experiences with the entire staff. They are friendly, professional and welcoming. See earlier comment
Erik Schulz - Scarborough, ME, left feedback 8 months ago
We had the BEST experience with Carrie! We were very inexperienced as first time home buyers but she made the process so easy and efficient. She was always available and catered to our needs. She is extremely knowledgeable, professional and friendly. Would highly recommend her to anyone looking to buy or sell a home in the Southern Maine area, will definitely use her in the future if needed!
Emily Blossom, Kennebunk, left feedback 9 months ago
More Testimonials

Listing data is derived in whole or in part from the Maine IDX and is for consumers' personal, noncommercial use only. Dimensions are approximate and not guaranteed. All data should be independently verified.
© 2022 Maine Real Estate Information System, Inc. All Rights Reserved.

Mortgage values are calculated by Sierra Interactive and are provided for estimate purposes only. Walking and Transportation data are provided by WalkScore as a guideline and should be independently verified.

Have a Question or Want a Free Market Report?

Have a Question or Want a Free Market Report?